I am sitting in the sunroom of Samtso’s parents house. I am warm, fed, and sitting in a comfortable chair. Wafting into consciousness are warm thoughts about Dolma’s family.

Their hospitality and willingness to try to communicate is noteworthy. Can you imagine housing a person who speaks not a lick of your language and hasn’t a clue in regards to your culture? Not only that, she doesn’t eat what you do and mostly sits around tapping on her iPad? And she is going to be in your house at least a week…a lot longer than it takes for fish to go bad? You can call your daughter for translations, which you do every now and then, but basically, this foreigner is a strange presence in your house. 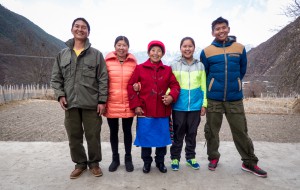 Everyone of Dolma’s family members, Sonam Gyitsen excepted (but, hey, he is a teenaged boy), were inclusive. They brought me to all of the inter-family visits, rituals of hospitality of which there were many. They didn’t let me miss a meal. And, they made sure my clothes were clean. We circumambulated the stupas, and I became the village photographer, a role that was easy for all of us. In short, they were wonderful hosts and it was special to be able to observe their daily lives.

For women, work is unending. Much of it involves food, either directly or not. Yangtso, Dolma’s older sister, is always the first up, initially gathering wood for the stove, so that the room warms up, the tea can be made, and the large breakfast, frequently leftovers with something new added, is hot. Tea is made in bulk, for in Hongpo salted, butter tea is drunk throughout the day. For me the first two cups I tried were fine — at least interesting — but I don’t find it refreshing, and also I think it contributes significantly to my unruly bowels. So I became the hot water queen.

After breakfast, the livestock are tended to. Living out their lives in a pocket-sized corral behind the kitchen, it is a small world for them, but is typical of what I see in Hongpo Village. There is no door out the back from the scullery, so the slop buckets need to be carried all the way out thru the front of the house and around to the back. (I think the single entry is a traditional security detail.) There are, at the moment, two piglets, two shortly tethered donkeys, two cows, one goose, and a herd of chickens. The chickens, by far, have the best lives. They get to roam all over, both in and out of the corral, pecking away, strutting their stuff. They look very healthy — even in the pot.

Sometimes Yangtso has help. But not often. As well as clean the breakfast dishes and tidy up after family and any guests from the day before, and taking care of the animals, she has all the normal household duties, like laundry and sweeping. But also, there are fields to prepare for planting, and the subsequent work of all farmers. And, of course, there is the next meal to prepare. Always. Mealtime is extremely important, and punctuality is essential.

Woven into most days are visits to the stupa. I don’t know if this is part of Losar, or a regular thing. Nor do I know if there is an order or priority, or even community association for each of the several stupas, but no matter which stupa we circumambulated, there were familiar faces. Greens boughs are brought to burn in the alter oven, accompanied by incantations, which end in a yelp for the men.

Throughout all of her chores Yangtso is chanting. Often, I am told, it is a version of O Mani Padme, but sometimes, the chants are unique to a specific purpose. Luseng, Yangtso’s husband, had a terrible accident due to the negligence of the owner of the car he was riding in, a fellow villager. The vehicle had a major malfunction which resulted in loss of control. In the resulting crash, his arm was badly broken, its use is seriously compromised. Complications from the surgeries, he also had two bouts of infections and was in the hospital for three months. At this point he has no strength nor mobility in his right arm and hand, so he spends a lot of the day doing exercises and chanting verses given to him by the local lama specifically for his healing. 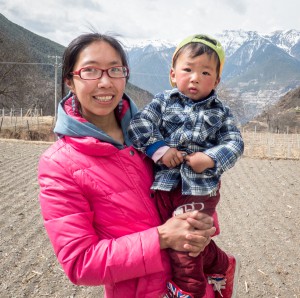 Upon the arrival of Dolma, a nice surprise for us all, along with the very loud Deqin, the local county town, entourage (Dolma’s father’s sister with two adult children, one of whom has the good government job, and bought the new iPad Air2 I brought over), the burden of daily chores is lifted significantly from Yangtso’ shoulders. Dolma, especially, is a very helpful person. And while she does have a super active fifteen month old son who needs constant attention, she is a person of extraordinary energy and was able to contribute a lot to the household. In turn, the family releases her from some of the burdens of having a young child by attending to the little fellow. Tibetan villages, or at least extended families, really do raise the children, and mothers are nonplussed by their kids’ absence.

Traveling from town to village and visa versa is still not easy, although the days of donkey back are gone from the regions I am visiting. Dolma made it as easy as possible for me. She truly facilitated this entire adventure, finding me places to stay, hooking me up with the invaluable driver, and helping me get my airline tickets. She is smart and decisive when need be, accommodating when that is appropriate. Saint Dolma: she is a gem.

As it turned out, the driver was of great importance. At Dolma’s suggestion, I hired him to drive me all the way to Lijiang, about five hours past ShangriLa. My plane to Xi’an flies out of Lijiang, and I couldn’t face taking buses with all the inherent changes, only to arrive in Lijiang, with my abundance of luggage, not knowing where I would sleep. This time it wasn’t free, but it was worth every yuan. Not only did he cut an entire day off the trip, he got me to Lijiang and found me a hotel with service to the airport. We also did some errands, like bank and ticket office, on the way through Shangri-La, taking care of some potentially worrisome trip details. The next morning he began his drive all the way back to the Village.

Lijiang is really lovely. Southern enough to be green, and prosperous enough to be healthy. I would like to spend some time there. But my flight is at the crack of dawn, and I have trouble to get into waiting for me in Xi’an.

This entry was posted in Hongpo Village, on the road, STILL CRAZY AFTER ALL THESE YEARS (china 2015).