Mama Espinosa and My Arrival in Hongpo Village

Dolma arranged for me to ride with a distant cousin, who was coming from Lijiang, through Shangri-La and going to Hongpo Village. How fortunate for me. No changing buses in Deqin, and there is the possibility of photo stops. His charge is about $50, but for a private car taking me the seven hour drive straight to the village, it feels like a deal.

Once again, I find myself with a slow driver. I glance at the speedometer to see exactly how slow we are traveling, but it’s needle lay peacefully on zero, and doesn’t budge no matter our speed. I am embarrassed to say I called Dolma because I thought he was tired. It turns out he just likes to drive slowly. Of course, I am a pedal to metal the person, so it is exasperating to go so slowly. In reality, no car sickness, and I can see a lot.

The trip is a hard one.

I cannot ignore what the Chinese are doing…just about everywhere. It is actually infuriating me. Dolma told me the road to Deqin had improved and now it is very good. Even the dangerous road to Hongpo is paved and stable. A light should have turned on when Dolma mentioned the upgrade, but it didn’t.

Vastly improved in terms of ease of travel is an understatement on par with saying there are a lot of people in China. The countryside is basically unrecognizable from my previous sojourn on the only road to Hongpo. Since the road has both been straightened and leveled, the terrain has had to make the adjustments…to hell with any natural beauty or the fact that people live in the area. Just put up a giant bridge over a gully and let the people continue to live there, never mind they now live like trolls under the bridge looking at piles of gravel. No big deal. Nobody is displaced.

Even the wonderful loop in the river that I photographed the first time around is now walled off so no one can see it unless they pay the exorbitant entry fee. The river is an extraordinarily beautiful jade green, and I have been looking forward to rephotographing this scene ever since I saw the color. It would have been a stunning image and in reality worth the entry fee. But, I’ll be damned if I am going to support the bastards who deny the public such a wonder. 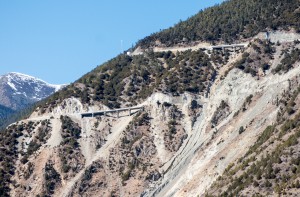 Improvements on the main road to Deqin and Hongpo Village. Hmm…any erosion induced problems on the horizon?

The further we travel, the more angry I feel. Gorgeous Tibetan dwellings, with terraced fields cascading down the steep mountain slopes, once looked out across the river to a mountain side marred only by a few people trails and a thin shelf for the rural highway. Now it is nuts. Rubble and tunnels and mudslides and ugly bridges and ridiculous massive landslide control contraptions and dugout hillsides, many blasted with some kind of binder (bentonite?) greet them when they look outside. There is no getting away from it. This work goes on for the entire the length of the new road (hours of driving). It is the price to pay for ease of travel.

The time and expense has been enormous. Mountains sliced and ground, wherever the need, then an attempt is made to tame the shale-like, unstable insides so that the main feature of this region are the containment structures. The remaining rubble from the demolitions are left in place,  enormous piles of ugliness. Did I mention this is the Snow Mountain National Park? It should be spectacularly beautiful. 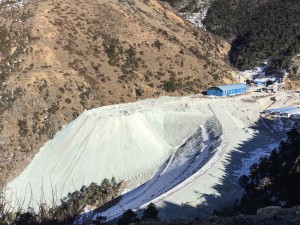 Mine, but what kind I do not know. I saw at least seven of these huge operations on my drive out.

And then the slag heaps. Ah, the slag heaps. Of course! Mining. Thus the destruction of an extremely beautiful—and very Tibetan— world. There is gold in them thar hills. And other valuable minerals.

When my husband was traveling in Baja, Mexico in the 1980’s, there was a gas shortage. The hangout was Mama Espinosa’s, where the best lobster tacos in the world could be had. A giant RV pulled into her gas station, and insisted on getting gas. The driver argued that she surely has some she was holding onto for herself, and when she refused to sell him any, because there was none, he drove off in a fury, She turned to Tupper and said, “When we had bad roads, we had good people. Now that we have good roads,we have bad people.”

Once in the village, I feel a shift. Hongpo is far enough up the mountain that the destruction below can be left below…at least for now. The new paved road doesn’t lead all the way to Ah Mo’s house, but the driver stops a (curious) villager and asks after her. Soon Yangtso and Yongdon Drolma (now very tall) appear. I get my money ready. I have decided to pay him a bit extra as there were no passengers to pick up in Deqin. Picking up an extra person traveling a short distance is how drivers plump their coffers. I present him with the bills, but he won’t accept them! I am flabbergasted, but such a fuss is being made of my arrival and my giant suitcase, that I rush off to help carry my burdens.

It is delightful to be here, and memories are flooding back. The season for my visit is different, but as we traipse down the little alleyways, things feel familiar. Except the house is so different that I do not recognize it. We enter from a different side, down concrete steps to an enclosed courtyard. The once great room, with the stove that had the pipe ending about seven feet from the ceiling and a dirt floor, is now three rooms, fully floored and there is a grand entry. The kitchen has the stove, but with proper ventilation. WOW!

They have waited for me to arrive before eating, so as soon as I freshened up (used the TOILET, a real porcelain squat toilet instead of the field), I am ushered into the kitchen and treated to boiled mutton, tofu and rice. It’s not bad at all, in fact the meat is quite tender.  Since there is no one who speaks English here, there is no after dinner conversation for me. I am tired, and a bit sick from the altitude, so I am pleased to be shown my quarters. I have a room to myself, and it is the same room where Dawa Drolma, Dolma, and Yongson Drolma and I slept on my first visit.

This entry was posted in Hongpo Village, on the road, STILL CRAZY AFTER ALL THESE YEARS (china 2015).